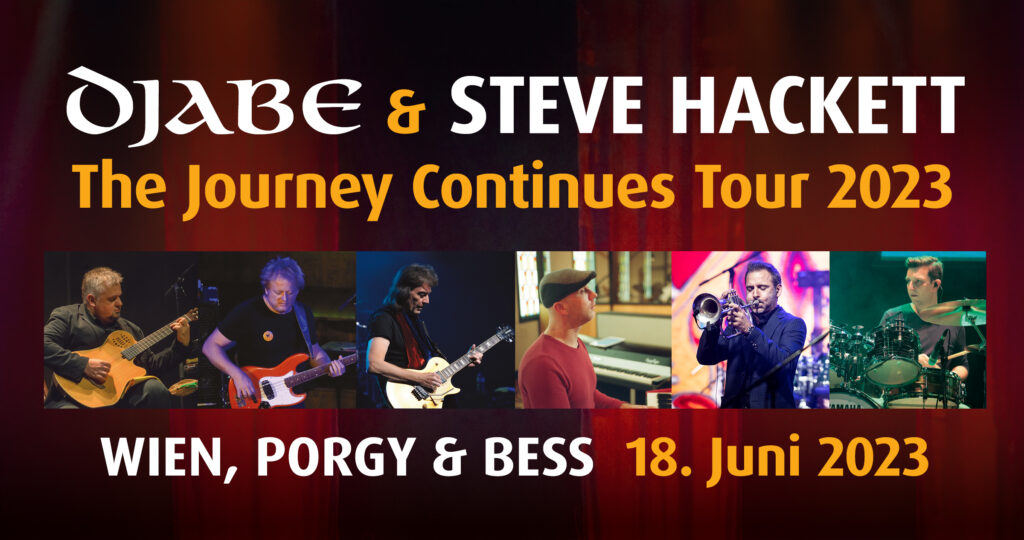 Djabe & Steve Hackett is returning back to Vienna, after the successful 2022 shpw in June this year!
Guitarist Steve Hackett, a key member of one of the most significant bands in rock history, Genesis, has a nearly 20-year long working relationship with Djabe. Since 2003, Steve has contributed countless times to the band’s performances and albums. Their 7 joint releases over the last five years have brought greater international success than ever before to this unusual formation. Steve Hackett & Djabe: Summer Storms And Rocking Rivers (2017), Djabe & Steve Hackett: Life Is A Journey – The Sardinia Tapes (2017) and Djabe & SteveHackett: Life Is A Journey – The Budapest Live Tapes (2018), Djabe & Steve Hackett: BackTo Sardinia (2019), Djabe: The Magic Stag (2020) and Djabe & Steve Hackett: The Journey Continues (2021), Live In Győr (2023) were released globally under the auspices of the internationally prestigious English record label Cherry Red Records. Each publication has sold thousands of copies worldwide and has achieved outstanding success in the United States, Japan, Brazil, England, Germany, Italy and the Netherlands.
In the summer of 2016, Steve Hackett travelled to the island of Sardinia with Djabe musicians, where an impromptu sound studio was set up next to the more than 1000-year-old church of Nostra Signora di Tergu. Here they started and ended 3 days with iprovised music sessions. Between recordings, they were inspired by the beauties and culture of the island. The recordings were made on a 24-track analogue tape, which were made into compositions in Budapest by Djabe’s bass guitar player and composer Tamás Barabás. The resulting material, Life Is A journey – The Sardinia Tapes blurs the boundaries between progressive rock, jazz and world music with its novelty, and is best defined by the adjectives instrumental and progressive.
The latest live album Djabe & Steve Hackett: Live In Győr, was recorded at the final stop of their 2022 concert tour in Győr, Hungary. This excellent sound and video recording is released in April 2023 in a variety of formats: 2CD / Blu-ray, 2LP and quarter inch tape, and on all digital platforms. The extra Blu-ray and CD sections contantain recordings from the last Porgy show from the 2022 tour.
The Djabe & Steve Hackett 2023 tour set-list is based on Sardinian recordings, but as usual, Genesis, Steve Hackett and Djabe classics are also featured on the show. They will also play from new Djabe album, Before. In its way of performing, the band combines the virtues of jazz, world music and progressive rock genres, forming a special mixture of the totality of the tracks, but even in terms of a single composition.
Steve Hackett – guitar, vocal
Tamás Barabás– bass guitar
Attila Égerházi– guitar, percussion
Zoltán Bubenyák– keyboards
Áron Koós-Hutás– trumpet, flugelhorn
Péter Kaszás – drums, vocal