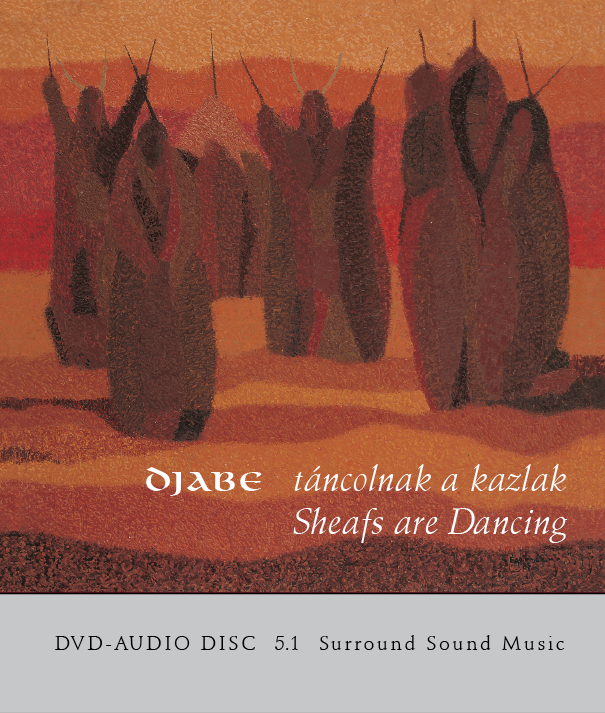 In 2003 Djabe prepared the best album of its career, the “Sheafs are Dancing”.

The DVD-Audio version of the album contains fantastic High-Definition stereo and 5.1 mixes. The surround sonic solution is really exiting. The album was nominated for Los Angeles Surround Music Award in 2004.

The material of the album was inspired by the paintings of the internationally known painter, Imre Égerházi. Tamás Barabás’s (bass guitar) and Attila Égerházi’s (guitar) tunes follow the set up of “one painting, one track”. The former Genesis guitarist Steve Hackett played on this album in the track Reflections of Thiérache. This was the firs step in the long term of cooperation between Djabe and Steve. In 2004 this album was nominated for the best extra content prize in Los Angeles at the Surround Music Award. The DVD audio authoring was made at the Abbey Road Interactive Studio in London. The sound engineers of this Word Famous staff respected of the high quality of the sound. The album was nominated for the Fonogram prize too, in the category of “The jazz album of the year” in 2004 in Hungary. The album was presented through a large-scale concert tour in Hungary and in the surrounding countries. The concerts were uniquely performed, in real 5.1 surround sound. The auditorium was surrounded by loudspeakers and because of this the audience was seated right in the middle of the band. From this tour the “Scenes” track can be seen on the DVD, recorded at the Pesti Vigadó. According to the Stereo High End magazine “if there is a High End in concert sound, then the production of Djabe was it”. Djabe did not mesmerise the audience only with sound but also with vision, as usual. The paintings and inspiring topics were projected onto a huge screen, often Imre Égerházi’s own, super 8 films. The “Iceworld” animation film got on the DVD from this projected video material, which was produced by Attila Égerházi and Focus-Fox animation studio on the bases of Imre Égerházi’s paintings inspired by the experience of being in clinical death. Due to the “The Sheafs are dancing” album the band received several European and overseas invitations (Kaunas, London, Sarajevo, Bratislava, Rochester, Washington, Pori, Stockholm, Burghausen etc.) therefore Djabe could enhance further the reputation of Hungarian music and musicians in the world. The excellent work of Barabás Tamás can be heard in the best sound quality. MLP 5.1, MLP 2.0 soundtrack is also available. Do not be dismayed if you “only” own a normal DVD player, as the mixed surround was put on in DTS and Dolby Digital format also onto the not everyday record. Naturally the film extras can be enjoyed in the most excellent sound quality, too. The albuml gets visually complete by the video clips, the concert film, the werkfilm and the portrait film on Imre Égerházi, especially prepared for the album. In the painting gallery we receive a cross-section on the life art of Imre Égerházi. Naturally, the 14 pages booklet contains the photos of all of the paintings, the biography of the artist and detailed information on music and musicians. Sheafs are dancing DVD-Audio won the international Prince Award as “The best multimedia work”.