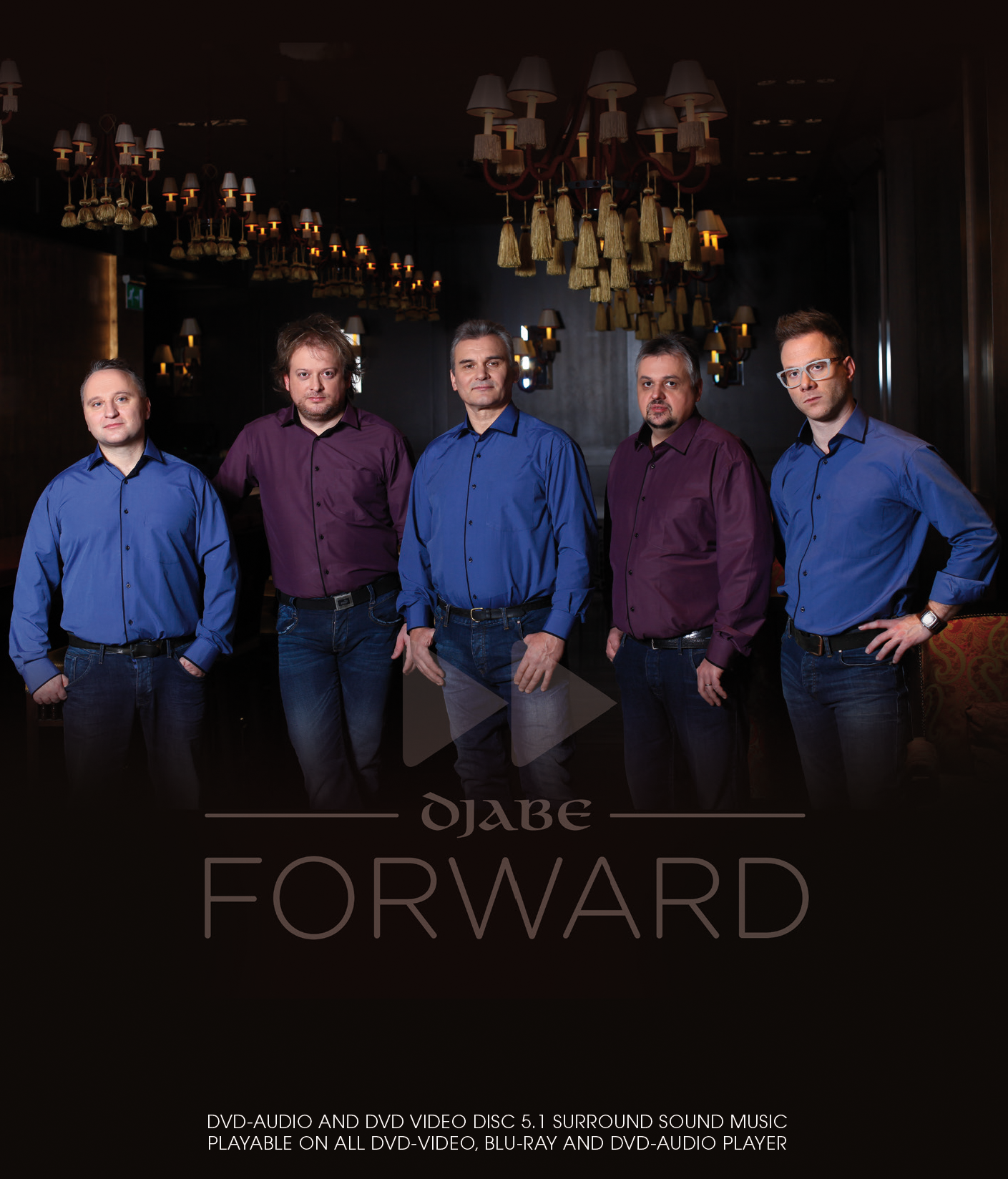 In the past 19 years of Djabe we realized that the actual studio album has been the most significant piece of the group’s work. We can hear it on the “Forward” during the first listening. Djabe completed its line-up and the special guests with a 57 piece symphony orchestra. Attila Égerházi’s summarize of the release:
“We decided to write a whole album in which the Symphonic Orchestra takes part integrally. We managed to agree with Hungarian Symphony Orchestra Miskolc on the making of the recordings, and in the meantime Tamás Barabás started to compose and structure the tunes in such way that these would be set on the symphonic orchestra. The arrangement was discussed with Zoli and they were working on the partituras together continuously. Tamás, as expected, started to writewith great ambitious in his dedicated own style. While listening to his compositions the characteristic signs of recent Djabe CDs can be recognised, and at the same time, the symphonic orchestra is raising his works into a different dimension. The title track “Forward” is also outstanding, because in the first three minutes, as overture of the album, the classical musicians play exclusively. Thereafter the music is swimmingly turns into the usual Djabe’s sound in such way that the symphonic orchestra remains on the top of sounds. These virtues are also typical of both compositions “Twin Pines” and “My Day”.

A unique piece is “Hang Out”, which is due to the fruitful collaboration created with Gulli Briem, who is the drummer of legendary Mezzoforte. Gulli is a regular participant at Djabe gigs, and by now he became one of the special guests in the studio recordings as well. On this album, the excellent drummer shows his percussion qualities. One of his favourite instruments is the hang drum, which is always a huge success at shows because of its special sound and shape. We have fallen loved to it too, and Tamás composed a sweeping work to this instrument. “Hang Out” is based significantly on the symphonic orchestra too. Gulli, besides, is sharing his talent with us in more tracks as well. He plays the berimbau and sings in“New Words”. Berimbau played last time by Sipi in Djabe. We have liked to have the album made not only special by the symphonic orchestra but to have further unique characteristics, too. So we invited our old friend, Malik Mansurov, the World’s greatest master of ancient stringed instrument the tar. As Steve Hackett characterized him, his musical professionalism and play are the mixture of John McLaughlin and Ravi Shankar. Tamás’ tune “Mr.East” was specifically composed for him. Malik just loved it and praised Tamás’ writing skills -and as he put it – the melody reminded him of the Iranian tar style. He would have loved to play this melody with his own traditional Azerbaijan mugham band in Baku too. Malik’s fantastic musicianship can be heard in many tracks, for example in “Lava Lamp” where even the old friend from New York, saxophonist John Nugent, also played. John is sounding very much typical American high standard straight from Rochester. Steve Hackett, guitarist of Genesis, our old musician and soul mate, can also be heard in “Lava Lamp” and in two other tracks (“New Words” and “Wind Tale”). Steve took part in the sessions of Malik at the Gramy studio, since the master of tar contributed to his next album, too. I left my own compositions to the end. These numbers are presenting many of the oldest Djabe soundscapes again in this album, thereby helping to develop a real overall picture of the band. Tomi arranged my newer and older compositions with great mind and enthusiasm. According to usual routine, he edited, arranged and composed parts to them while treating the symphonic orchestra with special attention and care. “New Words” became a real world music opus, since outside the members of the band, Malik’s tar, Gulli’s berimbau, Steve’s jazz (!) guitar and Sára Kovács’ didgeridoo play can be enjoyed and I play the kalimba and the rainmaker. An earlier, fledgling version of the composition, with the title “Without Words”, was first time recorded on the “Köszönjük Sipi!” memorial CD in 2007. “Life Spirit” is a composition consisting of three parts, in which the third movement was born in the spirit of my respect for Steve Hackett and Genesis. Tomi’s great idea was the lead theme and the solo, which give it a real progressive flavour, and last but not least, it is going to enchant Genesis fans. Recordings of “Wind Tale” were started in 2004 for the CD entitled “Slices of Life”. It was not finalized then, though the idea of its completion has been brought up by me each time we made a studio work. Finally the “Wind” has found its way to move on “Forward”. It doesn’t matter, because certain parts sound magnificently just with the symphonic orchestra. The odd thing about the recording is that, András Sipos played the congas and percussion, including the sound of the xylophone like percussion instrument made by Feri Kovács in 2004. At the time, the alto saxophonist of distinction, Viktor Tóth was also a member of the band, whose alto solo and bamboo flute play can be heard in “Wind Tale, too”. The closing track of the album “My Day” opens with the twittering of Üröm, Tomi’s stop-gap piece. The composition is built on the melodic, solistic bass guitar play. This kind of sound was mainly heard from him on occurrence of solos at gigs. My day provides the closing of “Forward” album as a large-scale tune accompanied by the symphonic orchestra. All members of Djabe took part in the work enthusiastically. There was a new element as parts of the drums were recorded by Szilárd Banai at his own home studio. As we have experienced, intimate home environment has inspired work positively. It was also true for both Zoli Kovács’ keyboard – and my guitar and percussion recordings at home. The violin notes for “New Words” were also recorded at my place with Feri. Tomi, as a sound engineer and a musician, worked on the album at home as well. Naturally, many of the recordings were made in Gramy studio, too. Many thanks to the other collaborators too, to Tibor Mótyán for tabla recording in “Mr. East”, also many thanks to Judit Herczeg and Péter Kaszás for giving the vocal in “Hang Out”, and many thanks to my daughter for her enthusiastic percussion play in “New Words”. The three-day recording session with the symphonic orchestra in Miskolc was a great adventure and work experience. Tomi supervised of the recordings, and as a composer he collaborated with Zoli who made the arrangement and conducted the orchestra.” The Forward released by Gramy Records on CD (with video bonus). A double 200 gram gatefold vinyl LP + CD with 22 minutes extra symphonic track on the Side D of the vinyl will follow. 5.1 surround version on DVD-Audio disc with extras will also come out. Last but not least as download on iTunes, Amazon, Deezer and dalok.hu