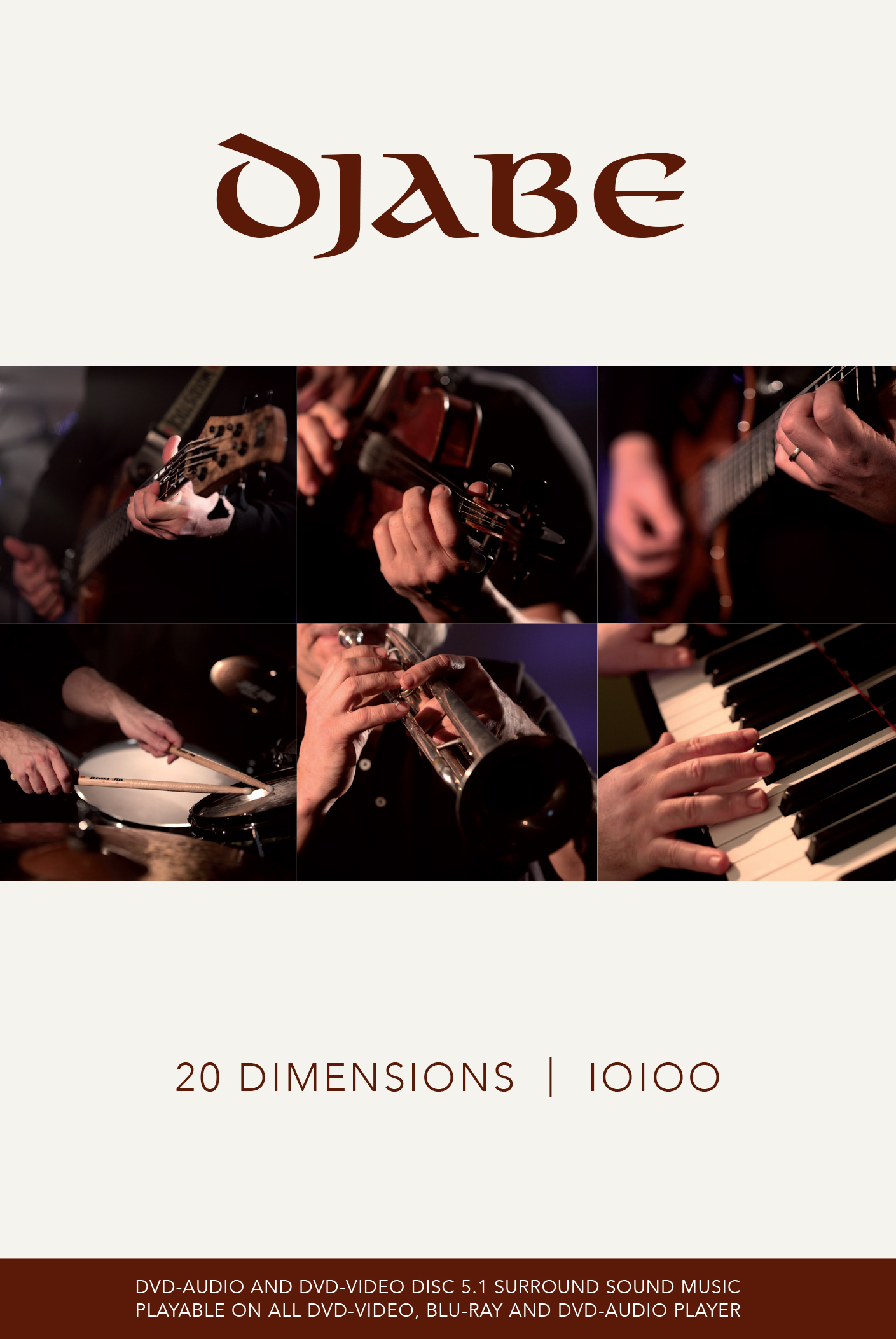 2016 studio album of the band celebrating its 20thAnniversary

The studio album of 2016 made in the innovative spirit accustomed to Djabe. Compared to the previous album ‘Forward’ recorded in tandem with the Miskolc Symphonic Orcestra ‘20 Dimensions’ emphasize on the acoustic and fusion vein of the band, with added modern electronica. The disc features 20 tracks or dimensions with a framed structure. At the beginning formulates the basics of dimensions, the concept of the album while the final, no. 20 track colligates with a philosophic view and the angle for continuation. Records composed by Tamás Barabás and Attila Égerházi are interconnected by 9 improvisations (Transition 1 to 9). These improvisations feature not only the work of the band members but of Malik Mansurov (tar) and Sára Kovács (didgeridoo, flute). Compositions of Tamás Barabás have the vigorous and sweeping characteristics accustomed to the artist, while those made in tandem with Attila Égerházi summon the lyric tone of the first period of Djabe history. Review of ‘20 Dimensions’ by László N. Göbölyös:“We’re invited for a scientific experiment. A kind wished by many to perform with any and all methods: accessing more and more space-time extent to unfold before us. No need for spacecrafts, telescopes or hadron colliders just some imagination and five musicians and some more who walked by. This is the invitation we get at the beginning of Djabe’s ‘20 Dimensions’ (the title also featured on the front cover in the binary code 10100). The picture on the cover features 12 hands in action (Ferenc Kovács featured twice as he plays both trumpet and violin). A sci-fi-esque intro and an also cryptic outro frames the nexus of pieces: 9 new piece connected by 9 transitions. Latter records born from the improvisations of band members and guest stars and while we can’t find two with the same zest, build or mood all has the same spirit within to form a perfect whole; pieces can be looked at as insight into separate dimensions while transitions represent the thrill traveling to the unknown.

Sensitive World is a vigorous jazz-rock piece featuring John Nugent, Sunday Afternoon is built around a child’s song-like pattern made alive by the two Kovács, with an elaborate piano-violin duo.
4000 masks as a slow, meditative keyboard piece lasting almost 2 minutes until Tamás Barabás hits with his zippy bass. No surprise what comes after is a continuous shifting between sauntering and rushes. Space Castle has nothing to do with being ‘spacey’ but all of our Earth’s corners can imagined into its cosmos from the Balkans through Arabia to India with Tibor Mótyán’s tabla play. Meanwhile the piano play and the soprano saxophone of Ben Castle summon 70s USA featuring the unstoppable drums of Szilárd Banai.
Waves From The System, springing to life from Attila Égerházi’s guitar accords opens the space for musical associations and genre changes of unparalleled freedom. Here, Tamás Barabás lets loose his signature ‘slap’ on the 5-string first but not last and some pyscehelic components are also present.
In Intermission the listener is greeted by two previous and widely praised Djabe piece, the Jégvilág and Life Spirit – former with Ferenc’s majestic trumpet, latter with Attila’s guitar play. Area 87 Tamás leads the way with synth – a piece continuing the Djabe style of last few years, completed by a bit of Steve Hackett solo. The klang is the latest instrument in Attila’s repertoire that inspired Klang Song, a layered and clean piece on ‘20 Dimensions’. On the other hand, Come Here of Tamás is typically a bass guitarist breaking free, a piece truly for dance and party.
Amongst Transitions some are real tiny masterpieces, like the first, statically teeming with voices: Sára Kovács, daughter of Ferenc makes an appearance with didgeridoo while her father does a Miles Davis-like trumpet triumph, Zoltán improvises some absolute avant-garde tirades and from the background an electric guitar fires up. Transition 2 features Malik Mansurov as hero, his wreaths of tar made complete by Sára’s flute. In Transition 3 again, Mansurov makes a great appearance with his tar followed by violin. My personal favorite is Transition 4 probably because of Attila Malik’s acoustic guitar and Ferenc’s violin. The fifth Transition with its mystique electric guitar could be mistaken for early progressive rock but with an appearance of tar. Transition 6 features a piano and wind instrument play. In Transition 7 one can almost expect Sipi to appear, like listening to Ly-O-lay-Ale Loya! A wail from cultures Castern Europe and Central Asia is what Transition 8 is about. The last Transition summarizes our travels. The longest is only a bit over 2 minutes, not a superfluous stave in them!
The final Out of Dimensions, with Atti’s music and the narration of Hans Petersen (also featured in the opening) is somewhat of an ars poetica for Djabe. “If you look far enough and break down your boundaries, you’ll see new close-ups from many aspects. These aspects are dimensions without limits you’ll have to try. The twentieth dimension seems like a conclusion – but after twenty, twenty one is the next.”
Album is avaliable in both CD and DVD-Audio version.
The double vinyl edition is planned for fall this year. The DVD-Audio contains material in High Resolution Audio format in stereo and surround. 24/96 MLP 5.1 and 2.0 24/96 LPCM and 24/48, DTS 5.1 audio tracks are also available.
The DVD-Audio with the studio recordings is paired with a DVD-Video disc which contains a one hour version of the album premiere concert of April 1, 2016. For extra content the disc contains a collage of tour moments captured in Super8 films and features all the Transition tracks as soudtrack for the movie. This film is interesting not just because it gives an opportunity to take a sneak peek into the band’s life behind the scenes but all 9 Transitions can be heard as one continuous track.